Move over Luke Skywalker, a new breed of Jedi warriors are taking over the galaxy. Their lasers can see right through you – to the molecule – and are powerful enough to destroy cruise missiles, rockets and mortar rounds. Can your lightsaber do that?

On Saturday, October 10, a force of over 550 middle and high school girls from around Los Angeles descended on USC Viterbi’s Epstein Family Engineering Plaza for an immersive hands-on experience with this powerful photonics technology on special invitation from Associate Professor Andrea Armani and her students at The Armani Research Labs.

In proclaiming 2015 as the International Year of Light (IYL2015), the United Nations is raising awareness about how light-based technologies provide solutions to global challenges in energy, education, agriculture and health.

“To celebrate IYL2015, the scientific community held an International 'Introduce a Girl to Photonics' Week from Oct 3-11 with events around the world,” explained Armani, the event organizer and Fluor Early Career Chair in Engineering in the Mork Family Department of Chemical Engineering and Materials Science. “Our target audience was fifth through 12th grade girls, but everyone was welcome, from toddlers to grandparents.”

The USC Viterbi School of Engineering, along with Northrup Grumman, Newport, the U.S. Air Force Office of Scientific Research, USC Corpus Callosum, Zeiss, and California Science Center were on hand from 10 a.m. to 4 p.m. with displays featuring virtual reality, lasers, solar cells, optical fiber and unexpected combinations of art and science. Armani designed the event like a science fair. USC Viterbi students and volunteers from corporate sponsors engaged in meaningful conversations around the exhibits with blossoming scientists from local schools.

Like many of the young women she invited, Armani’s interest in science and engineering started in the seventh grade: “I fantasized about being an astronaut. Growing up in Memphis, we had lots of blues, jazz and rock 'n' roll, barbecue and soul food, but our science experiments consisted of watching grass grow.”

Armani remembers the day she went to the science center with her middle school class and a chemical experiment that went awry.

“I mixed two chemicals together and watched it foam out of the beaker and across the floor. Though not the goal, for me it was like ‘wow – that’s science.’” That first eureka moment, born out of embarrassing failure, propelled Armani into an illustrious career as a chemical engineer. In 2013, "Popular Science" magazine named her one of their Brilliant Ten. Her resonant cavity sensors have outstripped standard optics and can be used to detect for biological weapons, waterborne pathogens, or radioactivity.

Armani didn’t just give girls the opportunity to play with some pretty cool tech but also made a lasting impression.

“I want to be a scientist when I grow up and make lasers and robots,” said Anabelle Bianca, a 6th grader from El Portal Elementary attending with her father.

Ask her why? “Because scientists are cool,” she says with a smile.

“We come to events like this to recruit the next generation of scientists,” said Luke Sweatlock, a research scientist at Northrop Grumman’s Aerospace Research Laboratories (ARL), and one of Armani’s volunteers. “More diversity on our teams only makes our research stronger.”

For the event, Sweatlock recreated one of Newton’s famous experiments – the geometry of a prism – using only a cellphone and stuff he found in his garage. “It’s so cool to see the look on their faces when they physically touch what was once an abstract math problem to them.”

Armani believes events like this can shape the way math and sciences are taught in our schools. “One of the classic ways of teaching science is to start with the equation. What if we started with the application? They would be hooked. Why? Because the application is more exciting.”

She hopes to turn this event into a recurring summer-long program.

Science and entertainment, a family affair

To take a break from the 100-degree weather, young students were invited inside the theater for a sneak peak of Disney Junior’s new animated space adventure series, "Miles from Tomorrowland." It centers around Miles, a curious boy with an inventive streak, his genius older sister Loretta - a savvy coder, and their family's adventures in Tomorrowland. The screening was followed by a lively question-and-answer session with series creator executive producer Sascha Paladino.

Paladino contacted Maja Matarić, professor and Chan Soon-Shiong Chair in Computer Science, Neuroscience, and Pediatrics, and USC Viterbi's vice dean for research, following the successful launch of "The Next MacGyver" project, a USC Viterbi, National Academy of Engineering and Hollywood initiative that envisions a new female engineer TV star MacGyver-ing her way out of any situation.

“Science and the arts are a lot more interesting when children are involved,” said Paladino, who has also written "Blue’s Clues," "The Octonauts" and "Sid The Science Kid." “One of the hopes I have for all the shows I work on is to seamlessly integrate great storytelling with solid science learning.”

Paladino and Matarić view entertainment and science learning as a family affair. “If we want to entice children into science and engineering, what better way to do it than through the shows they watch with their family?” asked Matarić.

“That’s what Miles from Tomorrowland is all about,” said Paladino. “The best adventures are with family.”

If you didn’t make it to Saturday’s event, don’t worry - Armani is partnering with the California Science Center to make the laser exhibits available for the entire family to experience, boy or girl, young or old. 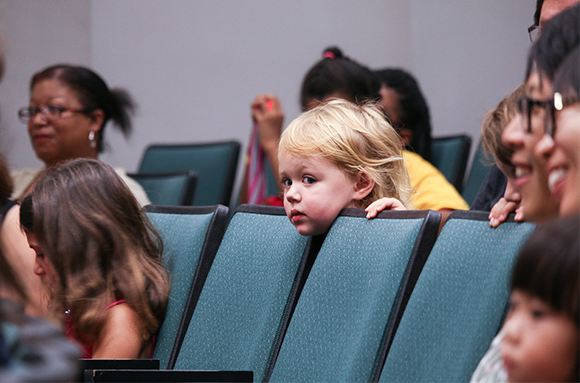 The event was made possible by financial support from the USC Viterbi School, USC Women in Science and Engineering, USC Ming Hsieh Institute and the Office of Naval Research.