Launching a Career into Orbit

The SMAP mission has broad applications for science and society. The data it gathers on soil moisture will be used to improve weather forecasts, monitor droughts, predict floods, assist crop productivity, and detail water, energy and carbon cycles.

The launch flight director and phase lead that day was Sarah Sherman, a USC Viterbi School of Engineering alumna. Sherman, who could fly a plane before she could drive a car, had wanted to work for NASA since her teens and has always had a passion for aerospace.

Sherman has been working on the SMAP project since September 2008, soon after she graduated from Princeton University with a bachelor’s degree in mechanical and aerospace engineering. She set her sights on the Jet Propulsion Laboratory when she heard from director Charles Elachi that JPL offers remarkable levels of responsibility to its young employees. “That's all I needed to hear to apply,” said Sherman.

Sherman started on SMAP very early in the project development. She worked on formulation, development, testing and launching. Now she is on the operations team where they command the spacecraft. Currently they’re getting the spacecraft checked out and are carefully turning on the instruments before they start collecting science data this spring.

For Sherman and her team, the launch day started at 2:00 a.m. on console. They had already rehearsed at least a dozen scenarios with possible things that could go wrong, and thankfully they were prepared. Indeed, the launch was seamless, even uneventful, as Sherman recounts, but added, “An uneventful launch is a good thing in the space industry!” 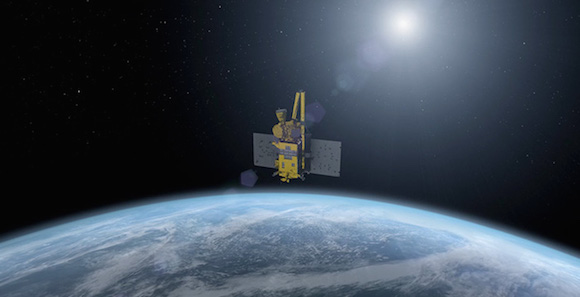 “I had ultimate trust in the team,” said Sherman. “As flight director, my job was to set the tone for the day, lead the room through the steps of launch, communicate problems, and keep forward momentum. I liken the role to an orchestra conductor - without the musicians, there's no music. But you need someone to lead the group and set the tempo.” Sherman counts herself fortunate to have such a high level of responsibility only six years into her career. “That made the successful launch even more satisfying,” she said.

The beginning of Sherman’s career at JPL happened concurrently with her graduate work at USC Viterbi. She did the first half of her master’s degree in the Distance Education Network, DEN@Viterbi, then she took a three-month leave from JPL to complete the last four classes in the spring of 2013, though even then, she worked on the SMAP project eight hours each week. She wanted to finish her degree in time to devote her full attention to the SMAP mission, which would be ramping up in 2014 and 2015. "It was important to give my full attention to school, so that I could later give my full attention to SMAP."

But the overlaps between her USC coursework and position at JPL had a synergistic quality for Sherman. “My experience at JPL helped tremendously with my USC schooling. I've been able to answer several exam questions because of knowledge gained on SMAP,” Sherman said. “Conversely, my experience at USC has led to many ‘Ah-ha!’ moments at work, and our project's chief engineer, Mohamed Abid, is also a [lecturer] at USC.”