By: Marc Ballon
February 16, 2016 — Alan Willner, USC Viterbi professor in the Ming Hsieh Department of Electrical Engineering and one of the world’s leading experts in optics and photonics, has been elected to the National Academy of Engineering, one of the field’s highest honors.

“I am exceedingly proud to have been a part of the Viterbi School and a USC Trojan for the past 24 years,” he said. “Any success I have is due to the fantastic support and encouragement of the extraordinary students, colleagues, and administrators at USC. I am truly honored, humbled, and excited to become a member of the NAE.”

Willner, The Steven and Kathryn Sample Chair in Engineering, has had a significant impact in the development of the high-speed optical networks adopted by top telecommunications companies. These networks are used daily by people across the globe and have altered the pace of communication and business.

“Alan is the 10th USC Viterbi faculty elected to the NAE since 2008, with all his academic career done at USC,” Dean Yannis Yortsos said. “This reflects well on the quality of our faculty, the resources and the environment provided for them to flourish and the culture of excellence in the school.”

Information today mostly travels over glass optical fiber, and Willner’s work aims at improving the performance of optical communication systems. As opposed to light traveling in free space, the speed of different wavelengths – or colors – of light varies slightly when traveling through glass. Indeed, photonic data pulses can ‘wash out’ during transmission because they are made up of photons of slightly different colors, which means each photon travels at a slightly different speed.

To compensate for this, Willner’s group at USC created a tunable compensator fiber element that synchronized the photons and produced a clean output.

On the heels of his fiber research, he founded a startup company called Phaethon Communications, which later developed a compensator that was acquired by Teraxion. The technology is presently deployed in many commercial systems worldwide.

Another example of Willner’s research involves “twisted” electromagnetic beams. A team led by Willner demonstrated that multiple twisted beams of light could be combined to transmit data at dramatically faster rates. The team, which included scientists from China, Israel, Pakistan, and Taiwan, developed a system of transmitting data using multiple twisted beams of light in free space at up to 2.5 terabits per second.

To put that in perspective, that is thousands of times faster than consumer broadband Internet connections. Willner went further and developed a similar technique with twisted radio waves, reaching free-space data transmission rates of 32 gigabits per second.

A Columbia University Ph.D. who earned a B.A. at Yeshiva University, Willner has received widespread recognition for his innovative research. He is an International Fellow of the U.K. Royal Academy of Engineering, as well as a Fellow of the American Association for the Advancement of Science; IEEE; National Academy of Inventors; the Optical Society (OSA); and SPIE. He received a John Simon Guggenheim Memorial Foundation Fellowship, the IEEE Eric Sumner Award, and a Presidential Faculty Fellows Award from the White House.

Willner has also been quite active in professional leadership, having been OSA president; president of the IEEE Photonics Society; co-chair of the National Academies’ Study on Optics and Photonics; and editor-in-chief of three international journals.

Willner will be formally inducted into the NAE in a ceremony in Washington D.C. in October 2016. 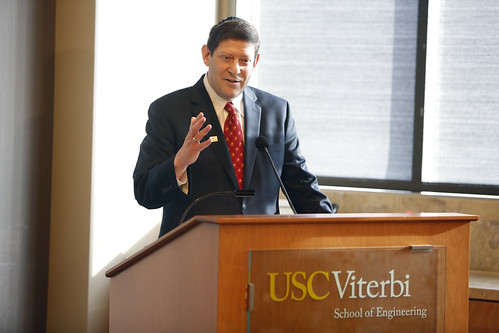