How would Ayanna Howard, Ph.D. ’99, introduce herself at a cocktail party?

She has designed robots that can think for themselves. She has developed the SmartNav Mars rover for NASA – a robot that can explore the Red Planet on its own, without human control. She’s a teacher, leader, explorer and innovator. In the last year, she was recognized as one of the 23 most powerful women engineers in the world by Business Insider and was named to The Root 2015, a list of 100 African-Americans responsible for the year’s most significant moments, movements and ideas.

Howard’s life in science is well storied, but one of her proudest achievements is the work she has done to open doors for female engineers and promote diversity in her field.

This year, the Computing Research Association, recognized Howard’s leadership by awarding her the A. Nico Habermann award “for her sustained commitment to increasing diversity, combined with her distinction in research.”

The award honors the late A. Nico Habermann, who headed the National Science Foundation’s Computer and Information Science and Engineering Directorate and who was deeply committed to increasing the participation of women and underrepresented minorities in computing research.

“I’m very excited,” Howard said. “It was definitely a surprise and an honor. Previous recipients were people who I admired and who have been personal mentors. I’m honored to be on the same list.”

Howard comes from a remarkable line of USC Viterbi alumni that includes Wanda Austin, CEO of Aerospace Corporation and Charles Bolden, current NASA administrator. These alumni have galvanized so many like Howard to pursue advanced degrees in engineering. U.S. News & World Report now ranks USC Viterbi number one for graduate engineering programs with the most women.

Despite this progress, “more still needs to be done,” according to USC Viterbi Dean Yannis Yortsos. "The new face of engineering is the face of bright women and men, spanning societal, ethnic and racial divides."

A report from the National Science Foundation revealed that as of 2013, 71 percent of professionals in science and engineering were white, 17 percent were Asian, 6 percent were Hispanic and only 5 percent were African-American. The American Society of Mechanical Engineers estimates that between 18 to 20 percent of engineers in the U.S. are female.

Inspired by the TV show “The Bionic Woman,” in which a severely injured woman attains extraordinary powers through artificial, bionic limbs, Ayanna decided at age 11 that she wanted to create artificial limbs for people.

After completing her bachelor’s in engineering at Brown University in 1993, she headed the software team at Axcelis, coding the first commercial genetic algorithm package.

She then joined NASA’s Jet Propulsion Laboratory, and rose to the ranks of senior robotics researcher in the Telerobotics Research and Applications Group, working on computer vision and the development of mobile systems. The Technology Review named the rising engineering star as one of the world’s top young innovators of 2003 for her work in this area. At JPL, she furthered NASA’s research on how to deploy rover robots into unknown, inhospitable terrains. Meanwhile, she worked on her Ph.D. in electrical engineering at USC Viterbi. Her research centered on the concept of humanized intelligence, the process of embedding human cognitive capability into the control path of autonomous systems. 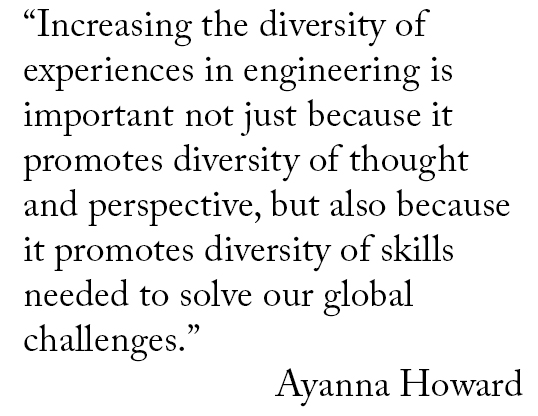 In 1999, when Howard earned her Ph.D. in electrical engineering, she also fulfilled her childhood dream of becoming “Bionic Woman.” Her dissertation involved designing robotic hands that could bend, twist, change shape and grasp objects.

“When I pitched this topic to Ayanna, she was very enthusiastic, even though the subject matter was difficult,” Bekey said. “But she was terrific, original, and creative. She designed the experiments to test the robotics very quickly, and she did it all on her own.”

“I could see from the very beginning that she was a unique and very talented individual,” Bekey added.

USC Viterbi Professor Timothy Pinkston, who also served on her dissertation committee, said Howard not only contributed fresh ideas to robotics research and development, but also to the broader effort of increasing diversity in the field.

“She was always very confident in her work,” Pinkston said. “She continues to contribute to cutting-edge research in human-robot interactions. But it is also fitting that she is being recognized for expanding opportunities for women and underrepresented minorities.”

In 2005, she joined the School of Electrical and Computer Engineering at the Georgia Institute of Technology as an Associate Professor and founded the Human-Automation Systems Laboratory.

“I get the most satisfaction when a student I’ve mentored becomes interested in pursuing a career in engineering and watching them be successful at it,” said Howard.

On top of her accomplishments, her work has been documented in several publications.

In 2003, the MIT Technology Review named her as one of the top 100 innovators in the world under the age of 35. In 2004, TIME featured her in their article, “Rise of the Machines.” In 2008, Howard received worldwide attention for her SnoMote robots, designed to study the impact of global warming on the Antarctic ice shelves.

“I’m not at all surprised that she has been so successful,” Bekey said. “Ayanna is an outstanding engineer and wonderful person. She works with tenacity and integrity in all her endeavors.”

Howard has also been a guest on CNN and PBS, participating in panels that discuss the growing importance of robotics.

“Robotics will be as pervasive as cell phones and computers,” Howard said. “Twenty to 30 years from now, they will be a part of cars, or assistants that help people shop for groceries. Robots will work for us and with us.”

Howard won’t rest on her laurels. She continues to tirelessly promote engineering as the empowering discipline of our times.

“There’s still a lot more that can be done,” she said. “We need to do a better job of showing the value engineering has to society. But we’re heading in the right direction.”