The average Facebook user spends about 33 minutes per day on the social network. Multiply that by over 150 million daily active users in the U.S. alone, and you get a Super Bowl audience every single day, flooding the net with likes, emoticons, selfies and cat videos, forming an algorithm that leads straight to Brandon Schlinker.

Schlinker is one of only 12, out of hundreds of international applicants, to be awarded a coveted Facebook Fellowship. 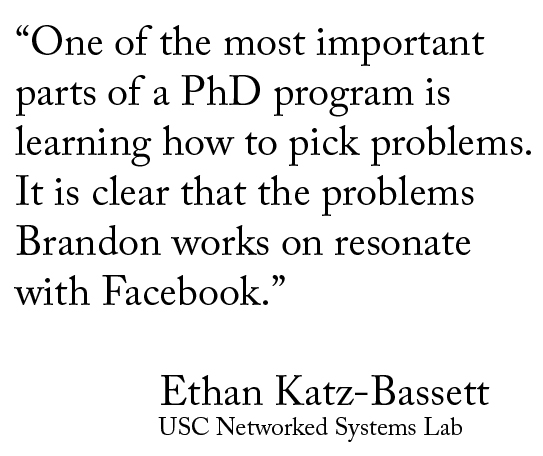 This means Schlinker is inside the matrix every waking hour. He’s the best friend you wish you had when the Internet bails on you.

“I figure out issues that get between you and your destination,” Schlinker said. “Anything that requires solving key Internet routing problems, like congestion and route hijacking."

Schlinker explained that outright failures and performance problems, like buffering in your videos, are often caused by the aging BGP protocol. BGP, or Border Gateway Protocol, is responsible for directing Internet traffic to the right gates. But BGP was built in 1994 and hasn’t changed much since. Those intimate with it marvel that it works as well as it does and doesn’t just bring the world to a halt.

Facebook must rely on this aging protocol to stream over eight billion videos each day, including an emerging bandwidth beast – virtual reality.

To add more madness, this year, Facebook teamed-up with Turner Sports to present the first-ever VR live-stream of the NCAA Men’s Division I Basketball Championship, showcased by Facebook’s Oculus VR that also had its roots in one of USC's main innovation hubs - the Institute for Creative Technologies.

With a growing number of platforms competing for eyeballs, Facebook wants its user experience to be first-class. That’s why they recruit people like Schlinker to make sure challenges like BGP don't stand in the way.

To get an idea of how competitive landing a fellowship in Menlo Park can be, over 200 researchers from the world’s top universities applied with outstanding proposals that addressed a specific Facebook challenge. Only a dozen made the final cut.

“We receive applications from around the world across a broad spectrum of engineering and computer science disciplines,” said Rebekkah Hogan, Facebook’s research program manager. “We’re looking for emerging talent, no matter where they’re from and were very impressed not only by Brandon’s proposal, but also by his background and publication record.”

Facebook fellows receive two years of tuition, a living stipend, and additional resources to further their research. The real draw is that the fellowship blurs the line between research and engineering to solve problems and ultimately enable new products to make the world more open and connected.

If Schlinker could rebuild the Internet today, he’d do it differently. “But I can’t just wake up one morning and say ‘I’m going to overhaul the Internet.’ Instead, I have to focus on designing solutions that help users and content providers, but are also practical and deployable in today’s Internet.” 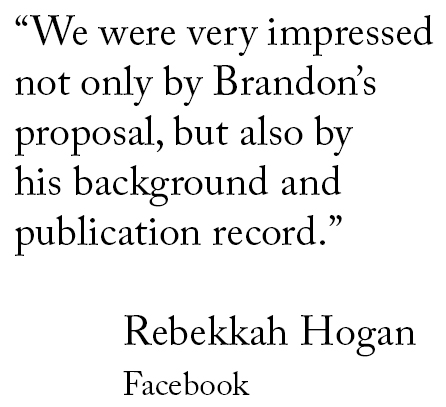 Many Internet problems have traditionally been difficult to tackle given the Internet’s decentralized structure, inherent barriers to adopting new technologies, and cost constraints. However, Schlinker is convinced that large content providers like Facebook are well positioned to leverage unconventional solutions.

That’s because these companies have built global networks with unprecedented connectivity to meet their users’ demands. As a result, they have many different routes they can use when sending traffic to end users and can often exchange traffic directly with an end user’s ISP.

PEERING and PATHS into a more connected world

Schlinker is designing systems that take advantage of this rich connectivity to improve end user experience. He is building PEERING, a BGP testbed that is already ushering a new class of Internet research.

PEERING has routers at over a dozen locations across three continents directly interconnected with hundreds of real networks via BGP, enabling experiments to announce or select routes and send or receive traffic.

Before PEERING, researchers were traditionally outsiders to the Internet routing ecosystem, limited to measuring, modeling or simulating it. The fidelity of a simulation was only as good as their knowledge of the Internet's topology and policies.

PEERING now gives researchers a way to be active participants. They can use it to run experiments in the wild that control routes and traffic to and from PEERING, subjecting them to real conditions. It’s also handing them a key new tool for understanding the Internet while raising the bar for how well they can validate new systems.

In addition to PEERING, Schlinker is giving Facebook one more reason to be excited. It’s called PATHS.

PATHS empowers providers to choose which route to use for traffic based on the demands of the traffic – for example, a video call versus a large data backup.

Schlinker, who also interned at Google last year, said he is “indebted” to his advisor, Ethan Katz-Bassett, and his colleagues at USC's Networked Systems Lab.

“Ethan always challenges me to work on new ideas,” said Schlinker. “He also stresses that it’s not just about adding another publication to your resume. It’s about getting those ideas out into the industry.”

When Katz-Bassett equips tudents like Schlinker and send them out to deploy solutions they've toiled over in his lab into the real world, he considers it "mission accomplished".

“Brandon came to USC with an impressive set of relevant skills and experience. He works extremely hard, and he is very demanding of the quality of his work. I think one of the most important parts of a PhD program is learning how to pick problems. It is clear that the problems Brandon works on resonate with Facebook."

The Network Systems Lab emphasizes picking relevant and real problems then empowering students to build systems that solve them.

“We collaborate widely with industry,” said Katz-Bassett. “This exposes our students to real problems and introduces them to opportunities like industry mentors, internships, access to data and pathways to deployment.”