Ten Years in The Making

By: Jay Kihiu
June 22, 2016 —
On June 15, the USC Viterbi School of Engineering’s very own GamePipe Laboratory proudly celebrated a full decade of innovation and success in game design. The last ten years have seen over 1,500 students graduate from what has become one of the top game design programs in the country.
Cardinal and gold tied together the celebration’s Gryffindor-Harry Potter theme. Strings of swooping lights twinkled overhead. The usually bare GamePipe Laboratory yard took on a charming elegance as game enthusiasts mingled in the cool summer evening.
Yannis C. Yortsos, USC Viterbi School dean, spoke fondly of the spirit of collaboration that has emerged over the last 10 years between different schools and departments, notably between GamePipe Lab – part of USC Viterbi’s Department of Computer Science – and the Interactive Media and Games Division within the USC School of Cinematic Arts.
“We understand the importance of strong storytelling in games,” Yortsos said. “This department hopes to continue and grow its relationship with cinema going forward.” Animation students from the School of Cinematic Arts, musicians from the USC Thornton School of Music, and USC Viterbi engineers frequently collaborate to produce stellar games and teams that are greater than just the sum of their parts.
Founding director Mike Zyda, who ten years ago gave up a tenured position at the Naval Postgraduate School to start a new gaming program at USC, had plenty to celebrate.  Launching a game design program with sparse resources in the entertainment capital of the world could have seemed daunting for a professor who should have rested on his academic laurels. Zyda was ready for the big challenge and fully embraced what was then described to him as a "temp position". He had previously worked as a development director on major titles such as America's Army Game, the first large-scale use of game technology by the U.S. government as a platform for strategic communication and the first use of gaming in support of U.S. Army recruiting. According to game historian Carrie McLeroy, America's Army has "grown in ways its originators couldn't have imagined". Dozens of government training and simulation applications have spun out of America's Army platform to train U.S. Army soldiers. 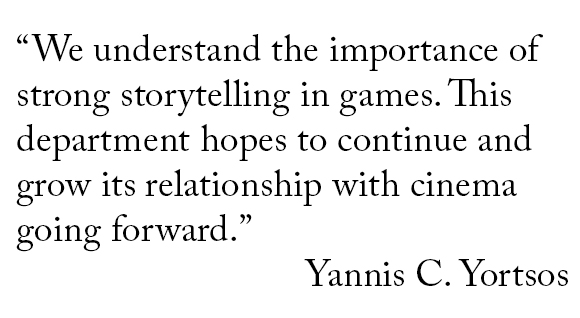 Zyda's leap of faith in founding the GamePipe Lab, the first game design program within USC engineering, provides students with a gaming education that blurs the lines between creativity and coding. Capitalizing on the success of America's Army, Zyda pioneered the "serious games field" - a game design approach that doesn't just view games for just their entertainment value, but also for their wider social applications and impact - something that he constantly engenders in his students.
"Professor Zyda always tells us to push the limits of what we can do with coding," said Jyotsna "Jyo" Kadimi, a graduate student in electrical engineering and producer on Recall, a virtual reality mind-hack that promises to improve a player's memory by placing them in “mind-palaces” constructed from their own digital documents. Recall is a perfect example of Zyda's idea for "serious games."

His approach has paid off.
GamePipe Lab alumni routinely accept offers from industry giants like Microsoft, Disney, Blizzard, Sony and Activision. Students have traveled internationally to collect prestigious awards while still pursuing their studies.  In April, 2016, Mild Beast Games—a team of USC Viterbi computer science students that included Steven Li, Aaron Hong, Mac Goldwhite, Cynthia Cantrell, Grace May, and Theodore “Teddy” Park, along with USC Thornton student composer, Kenny Regan, and sound designer Jade Kim from Berklee College of Music in Boston—took home the coveted British Academy of Film and Television Award (BAFTA) for Sundown.
No Computer Science Games Program event is complete without demos created by students and alumni of the program. Participants were treated to a smorgasbord of immersive experiences in VR and innovative games.
The featured projects highlighted CS Games’ colorful history as much as the imaginative minds behind them. Adventure, action, sports and strategy games all made spectacular appearances in student demos.
From the whimsical and critically acclaimed Misadventures of P.B. Winterbottom published on Xbox 360 in 2010, to hot new VR experiences like Recall, GamePipe Lab continues to crush myths about professional game design. One – that only the pros with the right budget and tools can do it, and two, that it’s only for hardcore gamers.
Every once in a while, a team creates a game that enriches lives beyond just entertainment. Fraiche, for example, is an app that its creators – all computer science majors – describe as an “immersive restaurant discovery.”
The app allows users to explore popular food spots in Los Angeles in a visually engaging and interactive way. Customers can virtually tour restaurant interiors in 360 degree, high definition footage on their smartphones using the app. A restaurant’s atmosphere suddenly sizzles to life. You may not be able to taste the food, but you can see and feel the restaurant’s vibe before you make a reservation.
The game also embodies an emerging trend in the gaming industry, one that the GampePipe Lab completely embraces: community.
“We urge and inspire users to make content and submit,” Fraiche web developer and VR producer, John Francis, said. “We want it to be Snapchat-like where everyone can enhance the total experience by contributing their own.”
GamePipe Lab alumni have ventured into the world to create some of the most amazing gaming experiences such as Call of Duty, God of War, Club Penguin, World of Warcraft and Destiny among many others.
"I stopped counting over a year ago, but at that time our alumni had shipped games played by over 2.5 billion players," said Zyda. "That is about $100 billion in revenue over ten years."
But the most gratifying experience for Zyda is still seeing a new game come to life. “I get emotional with every new game my students create. The love and hard work they put in makes me emotional.”
The evening left no doubt in anyone’s mind that the next decade would bring even greater successes.