It gets ‘Real’ for USC startups

Innovators at ‘The Real Deal @ USC’ meet their matches with Gen. David Petraeus and fellow investors

Doling out plenty of tough love and even tougher questioning, retired four-star Gen. David Petraeus and Dean Yannis C. Yortsos of USC Viterbi School of Engineering challenged a select group of tech startups to rise to the occasion and successfully pitch an audience of venture capitalists and investors on Tuesday, November 3, 2017 for the third semi-annual ‘Real Deal @ USC.’

The event, hosted at the historic California Club, was co-sponsored by James Montgomery, managing director of March Capital Partners; Jake Medwell, founding partner of 8VC; Citrix Inc.; the USC Marshall School of Business; and the USC Stevens Center for Innovation.

“Tonight there are three objectives,” Petraeus said in his opening remarks. “One is to look at these startups. The second is to further the relationships of the people in this room. The third is going to be facilitated by what we’re doing here, and that’s USC’s contribution: it’s what’s known as SCilicon Beach, and that’s with an ‘SC.’”

Petraeus, the former director of the Central Intelligence Agency, in addition to nearly four decades of service in the armed services, is also a Judge Widney professor at USC. He is a partner with global investment firm KKR & Co., serving as chairman of KKR’s Global Institute and as a mentor to USC student-veterans, in addition to academic appointments at City University of New York’s Macaulay Honors College and Harvard University’s Belfer Center for Science and International Affairs.

“Andrea has really been the key ingredient for this event. Every team has a coach, and Yannis and I are not the coaches,” Petraeus said. “She’s the one who’s made this all work in a very, very impressive manner.”

The Real Deal @ USC began as an initiative to foster the entrepreneurial spirit of technology and innovation in Los Angeles. In Belz’s own words, The Real Deal is the “pipeline” from innovation to interest. 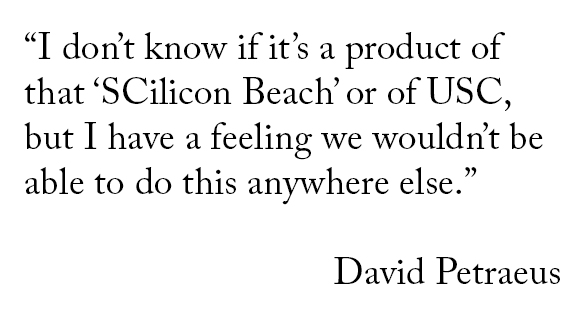 Tuesday’s event featured four USC-affiliated startups pitching their plans to an exclusive network of investors in a mere matter of minutes.

“Brands are trying to go after the millennial, but how do you reach a group of people who don’t watch traditional media?” asked Ashley Crowder, co-founder and CEO of VNTANA, a USC Viterbi alumna who pitched the augmented reality company behind the hologram selfie. “Millennials define luxury as an experience, so collaborating with companies like ours have helped these brands reinvent the way that they communicate.”

Last year at the U.S. Open, VNTANA partnered with Mercedes-Benz to help the brand capitalize on its endorsement deal with Roger Federer. An interactive Federer hologram was in a Mercedes tent during the entire U.S. Open, giving spectators the experience of serving tennis balls to the champ and capturing it all in a shareable video.

“Almost 8,000 people went through the experience, increasing [Mercedes-Benz’s] engagement by 20 percent from past years of their sponsorship,” said Crowder.

Though the entrepreneurs’ pitches were compelling, Petraeus, who evaluated the pitches together with Montgomery, pressed them further.

“As a prospective investor, someone would want to know, do you really think that you have a jump on possible competitors, and how high is the barrier to entry to compete with you once people realize what you’re doing?” Petraeus asked Ross Alan Mead, founder and CEO of Semio.

Semio is developing a standardized software platform to allow humans to interact with smart devices and robots through natural communication, such as speech and body language.

“When it comes to competition, a lot of people are working on individual spaces, but no one is working on a holistic approach to this problem,” said Mead, who earned his Ph.D. from the Department of Computer Science in 2015 under the guidance of Maja Matarić.

“Our customers are often plagued by the fact that they have to put all of these pieces together themselves. However, having done a lot of this at USC in my time as a Ph.D. student, I have a unique knowledge of how to actually solve these problems to make our product usable, out of the box.”

Following the round of pitches, which included a visual presentation from Pinscreen’s CEO and co-founder Hao Li, director of the Vision and Graphics Lab at the USC Institute for Creative Technologies, Petraeus led a fireside chat focused on artificial intelligence featuring Harel Kodesh, CTO of General Electric Digital, and Rajiv Maheswaran, former USC Viterbi research assistant professor of computer science and CEO of the USC-borne startup Second Spectrum.

Though the size of GE and Second Spectrum differ by a factor of hundreds of employees, their conversation explored the rapidly changing workscapes that both publicly listed Fortune 500 firms and startups alike have to navigate.

“As industry becomes more autonomous, humans will have to look at a higher lever of functionality to operate,” said Kodesh. “Twenty years from now, AI may take over flying planes, but we’ll still need humans to program and organize that intelligence.”

Maheswaran recounted his own story of the emergence of the sports-oriented and NBA-commissioned Second Spectrum, one with a decidedly L.A.-origin, one destined to live and thrive on the sunny shores of ‘SCilicon’ Beach.

“Our company began," he said, "as a simple research paper we were working on and won awards for as USC faculty. We were basically just happy with our work as fun, but then USC sort of put us through bootcamp. We learned enough about the market to start Second Spectrum with our students. We moved downtown, convincing more [Silicon Valley] people out of our LA network to move here, and within a few years, we’ve firmly established ourselves.”

By October 2017, Second Spectrum will become the NBA’s official analytics and tracking provider.

Like Second Spectrum, the four companies featured on Tuesday are on the verge of disrupting the LA start-up ecosystem.

Said Petraeus: “I don’t know if it’s a product of that ‘SCilicon Beach’ or of USC, but I have a feeling we wouldn’t be able to do this anywhere else.”

Ross Mead
Ph.D. '15, computer science
Semio
Semio is developing a standardized software platform to allow humans to interact with and use technology ranging from smart devices to personal robots through natural communication, such as speech and body language.

Ashley Crowder
M.S. '09 Engineering Management
B.S. '08, Industrial and Systems Engineering
VNTANA
VNTANA creates shareable group experiences by placing the digital into the real world. From holographic photo opportunities with your favorite celebrity to gesture controlled drone piloting, VNTANA's technology is at the cutting-edge of Social Augmented Reality without the need for wearables.

Hao Li
Assistant Professor of Computer Science
Director of the Vision and Graphics Lab, USC ICT
Pinscreen
Pinscreen built a deep convolutional neural network that can learn how to segment a face region in a fully unconstrained image for unexpected AR experiences.