An astronaut is injured in outer space, you have 30 hours

We love theories that make a difference.

At this point in the semester, students just want to see the theories they’ve regurgitated in class day after day put into action in the real world. In fact, they want to build a “theory” based on what really happens.

Over the course of a weekend, from February 26-28, NASA and USC Viterbi gave them a chance to do just that. The Associated Students of Biomedical Engineering (ASBME) organized the first makeathon in the university’s history.

The challenge they got, fit the epic feel of the event – design and build a medical device that can both prevent and treat upper extremity musculoskeletal fractures in outer space. Use only readily available materials (copper wire, duct tape, cardboard and Velcro)… and the collective brainpower of four students you just met.

Oh, and make it ultra-light-weight and ultra-affordable.

Astronauts are moon-rock tough. At least that’s what The Martian has us believe as astronaut Mark Watney, lost on Mars, casually performs amateur self-surgery, sans anesthesia. If stapling your own stomach doesn’t prove you have the guts to survive on Mars, try growing potatoes using your own poop. Okay, that last part has little to do with biomedical engineering, but the reality of injury or death in zero gravity has long haunted the final frontier.

“We tend to forget that, over the course of their careers, astronauts can spend anywhere between 1 to 2.4 years in space,” said event co-ogranizer Adam Seifert, ASBME co-president, a junior biomedical engineer. “In this time, bone loss is a well-documented complication, but it’s been largely unsolved. The solution has to be something out of the box and very creative.”

According to NASA, Russian Astronaut Gennady Padalka currently holds the record for most days spent in space. Padalka has spent 879 days in space over the course of five missions. American astronauts Jerry Lynn Ross and Franklin Chang Díaz hold the record for most spaceflights. They each flew seven missions.

Constrained to Earth, our bones retain fracture resistance by remodeling through a balance of bone resorption and formation. In a microgravity environment, bone resorption increases dramatically while bone formation slows down or stops altogether. According to NASA this leads to bone mass loss “at a rate of about 10 times that of osteoporosis.”

Tianna Shaw, B.S. ’88 in biomedical and electrical engineering, and project manager for multi-disciplinary teams at NASA Ames Research Center, formally introduced the problem at the makeathon kickoff event on February 26:

“Your role as biomedical engineers is extremely important,” Shaw told the 75 undergraduate students participating in the competition. “The future of a whole variety of activities at NASA depends on modern advancements in medicine. We’re looking to you to design miniaturized versions of biomedical instruments [used on Earth] that could fit in a space lab.”

Shaw explained that astronauts must be able to stay in space for years without needing to return to Earth for injury treatment. Crewmembers exercise for two and a half hours a day, six times a week (fifteen hours a week) while in orbit to avoid these issues. But physical exercise alone is not enough to mitigate the risks.

For the next 30 hours, following NASA’s charge, 14 teams of four to five scrambled to brainstorm, design, and CAD a medical device under extreme material and functional constraints. In true MacGyver fashion, some early prototypes were made out of pizza boxes, coffee cups and splash sticks. At the eight-hour mark, the whistle was blown and teams presented preliminary designs to a panel of judges who selected only five teams to advance to the device fabrication stage. 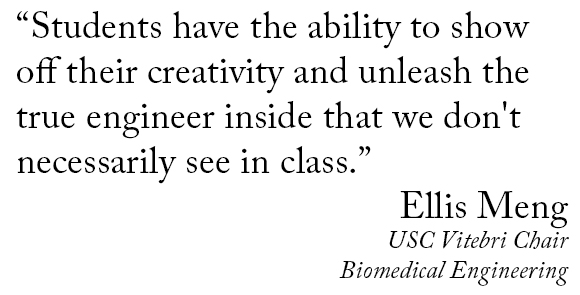 The five finalist teams took over USC Viterbi's Fabrication Lab, gaining access to tools like laser cutters and 3-D printers to bring their designs to life. The other teams had to stretch their talents to the limits and hack a solution without the aid of fancy lab equipment.

“They really started from nothing,” said Shira Bernard, AMSBE co-president and biomedical engineering senior who co-organized the event. “Some teams went on through the whole night. Through equipment failures, material failures, they had to adapt and work together like in the real world.”

The makeathon forced participants to undergo month’s worth of design process in the course of a few days.

“The fact that these students could tackle this problem after seeing it for the first time shows how they can think on their feet,” said Ellis Meng, USC Viterbi professor and chair of biomedical engineering.  “What really excites me about challenges like this is that students have the ability to show off their creativity and unleash the 'true engineer' inside that we don't necessarily see in class.”

All teams, regardless of their placing, prepared a final presentation for a panel of faculty judges and their peers. They were graded on design motivations, device functionality, impact on the field, and how it answered NASA’s needs. The finalized designs will then be sent to NASA for review and further development.

“It’s an amazing opportunity to get to work on a real-world problem and get to present our solutions to a real-world client like NASA,” said Bernard.

Bernard and Seifert want this event to grow into an annual cornerstone of USC Viterbi excellence and make it a lasting legacy of the Associated Students of Biomedical Engineering (ASBME).

Said Seifert: “We want to see people from all over the spectrum of majors and California universities participating. This will be a perfect place for people to put into practice what they’ve learned in the classroom.”