The Dunk or the Layup?

Graduating senior Xavier Hernandez’s recent TEDx talk draws upon the lessons of a rural upbringing, the perils of selfishness

The city of Woodlake, California is a quaint farming community of 7,200 people that rests in the heart of the San Joaquin Valley. An aerial view of the region reveals a patchwork of green and brown rectangles, woven together by an industrious agrarian culture known for yielding large amounts of almonds, pistachios, grapes, cotton, citrus and vegetables.

This lifestyle sprouts across Woodlake and its neighboring towns, as the San Joaquin Valley produces the majority of America’s agricultural production that comes from California. However, four of the 10 least educated cities in America are also located in this area, according to Forbes.

Being immersed in a rural setting, Xavier Hernandez, a USC Viterbi graduating senior in industrial and systems engineering, developed a curiosity for mechanical systems and systems architecture, which helped him uproot to Los Angeles to pursue his dreams of using engineering to help those who are disadvantaged.

“Growing up, I was always riding and fixing ATVs, mountain bikes, and cars,” Hernandez said. “I just loved things that were mechanical. Soon enough, that translated into maintaining irrigation systems and helping out on the ranch. I just really got into working with my hands and learning about how mechanical systems worked.”

Hernandez grew up on a 135-acre citrus ranch that was half the size of the USC campus, and with far less people – a change in setting that was as drastic as it was swift when Hernandez first set foot in the Trojan heartland.

“I wasn’t used to having this many people around me,” Hernandez said. “It was a very different mindset.”

Hernandez faced the challenges of acclimating to city and college life, while keeping up with the rigorous academic demands of an engineering course load. He failed his first physics course his freshman year.

“I lost track of my roots and hard work,” Hernandez said. “It took me time to realize it wasn’t the ranch anymore, and I had to adapt. But failure is a part of life, and it gave me a different perspective on life.”

“Physics was a pivotal point in my life because I nearly lost everything,” said Hernandez. “I almost switched out of engineering altogether because I didn’t think I was good enough to be a USC engineer anymore. After I switched to industrial systems engineering, I really found my passion and everything began to change.”

His resilience and refusal to accept failure propelled him to various leadership positions on campus.

“Grades have a limit, “ Hernandez said. “They only go from zero to 4.0, but the impact you can make and the mark you leave in this world doesn’t. That goes from zero to infinity.”

Hernandez became the vice president of professional development at the Institute of Industrial Engineers and the corporate representative of the Society of Hispanic Professional Engineers.

He was also elected onto the executive board for Engineering Without Boarders (EWB) as a sophomore. He served as events and fundraising chair of the USC chapter.

After entering and winning first place for the Tyler Palmer Poster Competition at the regional conference, he was accepted to become a regional officer on the West Coast Regional Steering Committee. 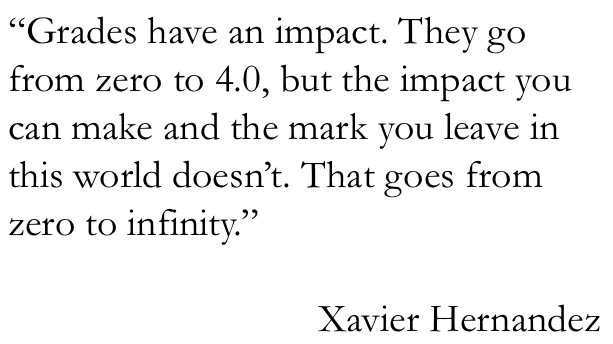 He has helped oversee six states of EWB chapters and also presented his “Fund Your Way” workshop to chapters, on how to brand and build funds, at the first annual Symposium Without Borders conference at UC Davis.

“This organization really hit close to home,” Hernandez said. “It helped shape me as a leader, and it gave me a family that talked and acted like me. But it was also really personal to me because I came from a poor, rural community, and I see people who want to make a difference and want an opportunity. EWB was the best way for me to help them.”

Hernandez’s accomplishments at USC led him to present a TED Talk, along with five other students, at TedxTrousdale last month. He was the only engineer student selected.

"I knew we had to give Xavier a speaker position the moment we interviewed him,” said Winny Huang, a member of the TEDxTrousdale selection committee. “I found his topic of altruism incredibly important, especially in the society we live in today. People like him don't come around often -- his selflessness is something I had never encountered before during my time in college."

Hernandez delivered a speech called “The Dunk or the Layup.” His message is to be unselfish.

“I used basketball as a metaphor about the decision to make selfish and unselfish acts,” Hernandez said. “The dunk is the selfish act that messed me up. But the layup is the unselfish act that people also need to do in order to keep them grounded and help them appreciate those who helped them achieve their success.”

Hernandez thanked various members of his family for helping shape his values and drive to graduate from USC, despite all the early hardships he faced.

“My parents taught me hard work, my sister taught me to care about the world, my brother taught me to protect my goals and dreams, and my grandparents helped give me spirit,” Hernandez said.

Hernandez described the talk as the “most cool and nerve-racking” experience of his life.

“I wanted to give hope to people who don’t get the best grades because the world works differently for different people,” Hernandez said. “I just happened to take advantage of it, and I’m fortunate enough to have the support of great friends and family.”

“As a child he was strong, thoughtful, caring and loved by his family,” said Xavier Hernandez, Sr., Xavier’s father. “He made the decision to be happy each day, and that attitude has carried over to USC, which has allowed him to achieve the success that he’s had.”

“When I see Xavier now, a young man in college who still encourages his friends and classmates, it makes us happy to see he still maintains the same attitude he had growing up,” said Barbara Hernandez, Xavier’s mother. “His TEDxTrousdale speech showed how love and encouragement has carried him through his life."

Despite his persistent, and affable, humility, Hernandez still has lofty goals and creative ambitions.

Although Los Angeles is widely recognized as the epicenter of west coast hip-hop and a driving force of American pop culture, the San Joaquin valley has left its fingerprints on modern American music as well.

The San Joaquin Valley has been a major influence on American country music, nu metal, R&B and hip hop music, primarily though the Bakersfield Sound, the Doowop Era, and the Bakersfield Rap Scene.

Being at the foothills of this smorgasbord of musical influence had an impact on Hernandez, who was constantly surrounded by different songs.

“I remember washing, waxing, and detailing our award winning low-rider truck when preparing it for car shows, “ Hernandez said. “I was always hearing old school music like Midnight Star, Dazz Band, One Way, Mary Jane Girls, and The Gap Band, in the background. That became my first love.”

He started writing poetry at a young age, and got his first taste of hip-hop in a high school rap battle where he got “destroyed” by his friend, Jamie Miyaoka, known by his stage name, “Yokes.”

“My influence in rap started with rap groups like the Wu-Tang Clan and Dilated Peoples, which sprouted me into having idols in rap like Kendrick Lamar, Logic, and J. Cole,” Hernandez said.

Moving to Los Angeles only enhanced his musical passion, as he was an actor in a music video performed by Miyaoka. He also served as a hype man at a friend’s concert. A week after, he recorded his first song in a studio titled “Snaps.” He hopes to work on an album this summer.

“I still remember Xavier’s fist song he recorded in my studio,” Miyaoka said. “He was nervous, but confident. To say the least it was like a natural athlete picking up a basketball or a football. His vocal presence was unlike anyone I ever heard on the microphone, and I knew he had big potential and talent. Not many people that I know could do what Xavier did with such ease.”

“Music touches the world,” Hernandez said. “Engineering may not yet, but it will. Music is about people’s struggles, triumphs, and tragedies. It allows you to get different perspectives of life. I’m blessed to be rapping and be an engineer.”

As Hernandez approaches graduation, and the conclusion of the USC chapter of his life, he hopes to embark on a career path that combines engineering, community service, and hip hop into one dream job. He hopes to accomplish this while staying true to his upbringing and personal values.

“People should never forget their family and the people who help them out,” said Hernandez. “That’s not what the Trojan spirit is about. It’s about working toward your goals, not falling, and refusing to keep your head down.”